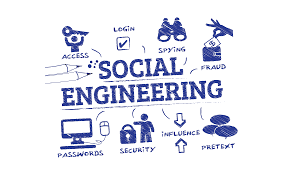 When we talk about cybercrime, the vision of the vast majority of users revolves around complex malicious codes created specifically to attack a specific organization. But in reality, cybercrime does not generally operate in this way. The main reason is that such attacks require a very high investment of time, human and economic resources. Most cyber-attacks focus on attacking the largest number of victims, with the least possible investment. To achieve this, one of the techniques preferred by cybercriminals is social engineering.

Las Vegas What is Social Engineering?

Social engineering bases its behavior on a basic premise: it is easier to manage people than machines. To carry out this type of attack, psychological manipulation techniques are used in order to get users to reveal confidential information or perform any type of action that may benefit the cybercriminal.

Social engineering attacks use email as the main channel for its propagation due to its massive use by both companies and individuals. But it is not the only way that cybercriminals use since they can use other communication channels such as phone calls, messaging applications, social networks, etc.

Social engineering attacks can be divided into two different types depending on the number of interactions required by the cybercriminal.

These types of attacks seek to affect the largest number of users, making only one communication. They are common in phishing campaigns, such as those carried out against energy or banking entities.

In farming attacks, cybercriminals make several communications with the victims until they achieve their objectives or obtain as much information as possible. Some examples of such attacks are those that seek to instill fear in victims through alleged private videos or future attacks against your company.

The cybercriminals use the below-mentioned techniques to manipulate their victims.

As a general rule, we as workers and citizens in general respect the authority of our superiors, either within the organization or in everyday life. This type of attack is based on that respect we have for our officials and authorities such as the State Security Forces and Bodies.

Especially in work environments, workers generally have this willingness to help colleagues as much as possible. For this reason, cybercriminals can impersonate a false employee of the company. Another variant used is to impersonate a computer technician to install unauthorized remote access tools.

3. Fear of losing a service

This technique is commonly used in phishing campaigns. Under the pretext of repeated unauthorized access, change in policies or any other deception, cyber criminals force the victim to access a fraudulent website where they steal confidential information.

In some cases, cybercriminals base their strategy on the fear of users for not being socially accepted or losing their reputation. This is common in sextortion emails, where cybercriminals threaten to spread an alleged private video that doesn’t really exist.

This type of deception is based on offering a free product or service in exchange for private information. This type of fraud is usually carried out by means of pop-up web pages that usually appear when browsing unlawful sites. It is also common in social media messages or messaging applications.

The best way to protect against social engineering attacks is to train and raise awareness among employees. A system with the most modern security measures and technologies will not help if, by means of a simple email, the cybercriminal obtains confidential information that is very valuable for the company.

To avoid social engineering attacks there is no magic formula that allows their identification since these can be very varied and use different techniques.

Social engineering is one of the techniques most used by cybercriminals to achieve their criminal objectives. To minimize the risks of this type of fraud, the best way is to train and raise awareness among your employees.

One of the ways to protect yourself for cybercriminals is to use a VPN service. VPNshazam offer the best Virtual Private Network that fulfills all of your needs regardless of whether you are travelling or resting at home.

VPN also helps you to avoid geographical restrictions and allows you to access your favorite sites. For more information, feel free to contact us anytime! :)

Is Your Favourite TV Show A Malware?

People nowadays download torrents of their favourite TV shows like Game Of Thrones which ended recently. There are many chances that the files you download from torrent could very well be a virus. A study reveals 126,240 users were attacked due to downloading from...
Read More

CAN YOU STOP MALWARE AND VIRUSES WITH VPN SOFTWARE?

If you ask a common PC user who has bought both Anti-Virus and Firewall protection for his PC from his hard earned money and installed on their network whether their data is fully protected from malware and virus attacks they would answer you with a resounding ‘yes’...
Read More

What Security Vulnerabilities Are Addressed By VPN

The Virtual Private Network can be considered as one of the emerging technology of the recent days to stay secure from different kind of cyber threats. By using several types of advanced encryptions, VPN always provides an effective solution against all the on-going...
Read More

Benefits of VPN: Get a Highly Scalable Secure Network

Benefits of VPN: Get a Highly Scalable Secure Network As we all know but again I want to define the term “VPN” stands for the Virtual Private Network. VPN provides network connectivity over a long physical distance. By the means of VPN long-distance and secured...
Read More